Recap & Status "Having Homer for Dinner" "Ride, Amazons, Ride!" "The Life That's Been Erased" "Be Like Thersites" "Old King Priam atop the Wall" "The Embassy at the Tomb" "The City Burns!" "Home" "Arrival" "At the King's Table" "Ink-Song" "A Table of Allies" "The Judgment of Paris" "A Dance of Conversation" "Who?" "The War God" "The Dream of Penthesileia" "The Dream of Achilles" "Hold Back the Dawn" "The Marvelous Gift" Coming Soon... Copyright Appendix A: History of the Penthesileiad Appendix B: The Penthesileiad of Quintus Appendix C: The Penthesileiad of Laurence Binyon

Appendix A: History of the Penthesileiad 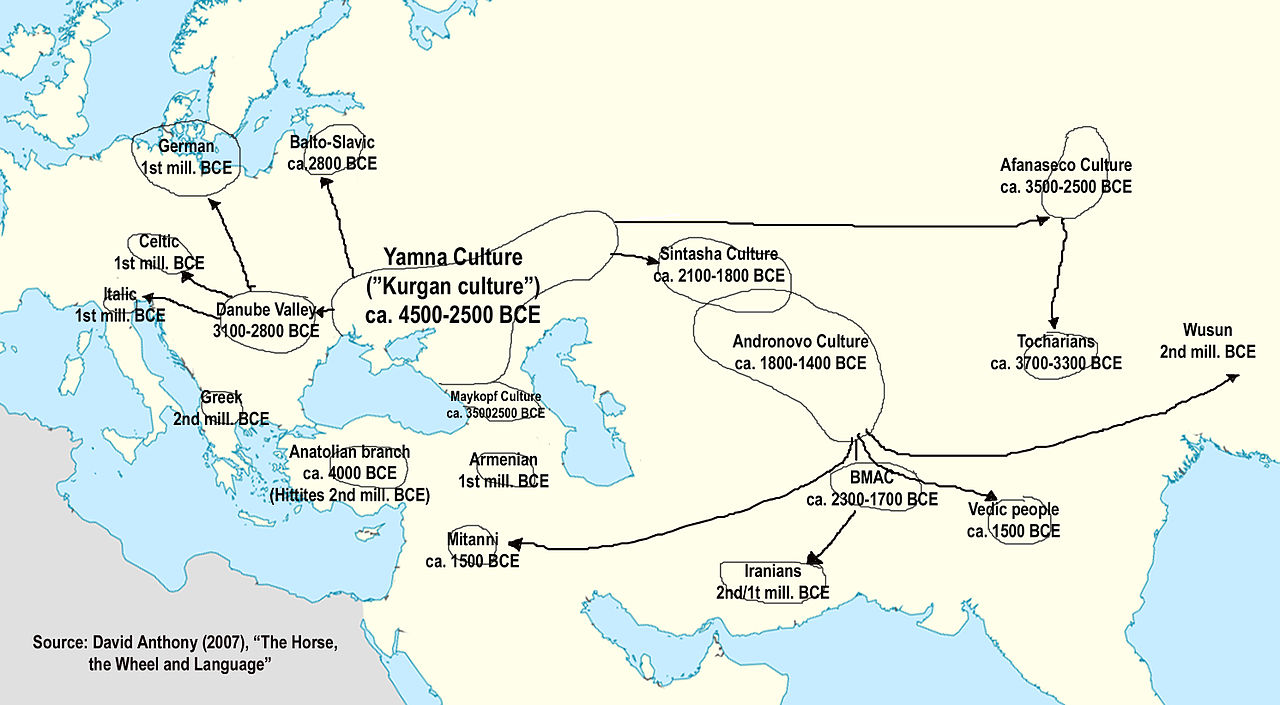 The proto-Greek tradition attached these stories to a specific city in Asia Minor in the Late Bronze Age. Fragmentary evidence hints at variations where Penthesileia arrives before the death of Hector, where Penthesiliea defeats Achilles in battle, and where Penthesileia and Achilles tragically kill each other and are united for a happy afterlife together.
The Trojan War was believed to be entirely fictional until late 19th Century archeologists discovered the ruins of a city that matched Homeric descriptions of Troy, and evidence of its destruction and renovation several times over a period of centuries. Although there's no direct evidence of conflict between Bronze Age Ilion and a proto-Greek invasion fleet, contacts between these two civilizations have been established through the artifacts they traded.
More recently, genetic analysis has shown that the remains of some Bronze Age warriors on the Asian steppes, initially assumed to be men, also include women, and that some of the female remains show damage consistent with battle wounds. The female warriors of this culture were one possible source of Greek myths about all-woman Amazon armies.
So while it's unlikely that actual Amazon warriors ever battled Achaean invaders on the Troad plain, the possibility can't be entirely ruled out.

Homer, whether as a single bard or as a multi-generational school of rhapsodes, is credited with codifying the Iliad and Odyssey in something approaching their current forms, probably in the 8th Century BCE.
The Aethiopis, the story that directly follows the Iliad in the Epic Cycle, was believed to have been first codified by Homer's student, Arctinus of Miletus. The Aethiopis began with Arctinus's Penthesileiad, the story of the Amazon warrior Penthesileia, who fought on the side of the Trojans. Unfortunately, the Aethiopis and other non-Homeric epics have been lost to us except for their descriptions and some fragments.
In Ancient Greece, when the Penthesileiad of Arctinus was still being recited, pottery decorations often depicted the fight between Achilles and Penthesileia or the game of dice played by Achilles and Ajax. These images outlived the text, and offer tantalizing clues about how the Amazon queen's story was told.

Virgil, in the 1st Century CE, refers to Penthesileia in his Aeneid and may have used her as a template for the woman warrior, Camilla. However, the most detailed and complete Penthesileiad that still exists is the first book of the Posthomerica of Quintus of Smyrna, tentatively dated to the 4th Century CE.
We don't know much about Quintus, except that he claimed to hail from Roman-occupied Anatolia, near the spot where the ruins of Troy were located, that he wrote in Greek, and that he may have had access to sources and traditions that are no longer available, perhaps even a copy of the Arctinus's Aethiopis.
The Quintan Penthesileiad, along with the rest of his Posthomerica, was preserved by Byzantine scholars. Manuscripts were rediscovered in the Middle Ages. By the 1800s, translations were made into French and German, but an English translation would remain unavailable into the early 20th Century.
Arthur S. Way's 1913 English translation of Quintus appears in Appendix B. 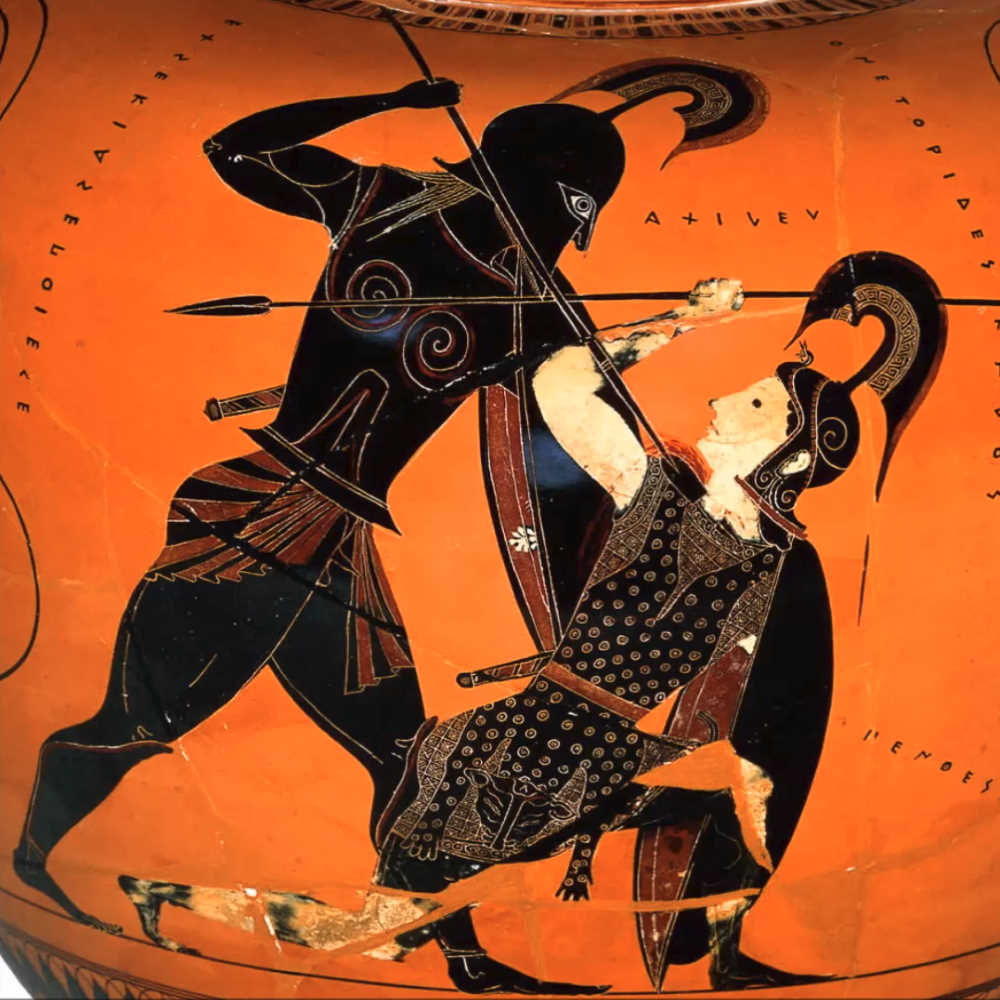 Medieval folk tales reimagined Queen Penthesileia as a lady knight in armor, with all the heraldry of an imagined Amazon nation. As the Trojans had become firmly identified with the founding of Rome, their Amazon allies were now regarded as loyal and sympathetic allies to a lost cause that was later redeemed by history.
New traditions evolved, including a romantic connection between Penthesileia and Hector, the Amazon queen's chivalrous quest to avenge her lover's death, her own eventual death at the hands of Neoptolomus, and an honorable burial on the banks of the Thermodon River.
Examples in this genre include Roman de Troie (1160) by Benoît de Sainte-Maure, City of Ladies (1405) by Christine de Pizan, and the Troy Book (1420) of John Lydgate. 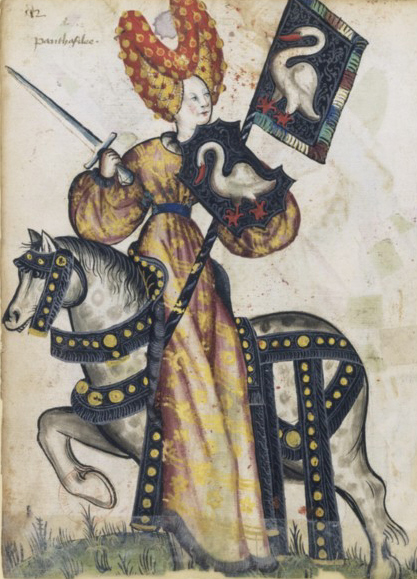 Playwright Heinrich von Kleist's 1808 stage play, "Penthesilea," may have been inspired by an early German edition of the Quintan Penthesileiad or by other sources. Channeling the spirit of a rhapsode, Kleist put several new twists of his own on the traditional story.
Kleist's Amazons, led by Queen Penthesilea, are drawn to battlefields because, in their culture, they can only mate with warrior men they have personally defeated in combat. Descending upon the Troad plain like salmon in a spawning season, the Amazons issue personal challenges to the best fighters on both sides in a frantic quest to defeat, dominate, and mate with them.
As in traditional tellings, Penthesilea and Achilles fall in love at first sight. Something of a courtship ensues, but the cultural gap between the Amazons and Achaeans proves too great. Wacky miscommunications and misunderstandings ruin any chance these two warriors may have had for a healthy relationship until, in the end, Penthesilea kills Achilles and feasts on his raw flesh.
Feeling remorseful afterward, Penthesilea literally wills herself to death.
Kleist's Penthesileiad is a modern remix of the traditional elements into something new. His version explicitly spotlights the horrific end scene of some retellings, in which Achilles violates the corpse of Penthesilea after slaying her. By providing a turnabout, Kleist allows Penthesilea to be the one to win the battle, to experience the passion-driven madness, and to deal with the messy aftermath.
However, as the play's experimental format was deemed "unstagable" as an early 19th Century production, Kleist's Penthesileiad was not performed before an audience until 1876.

British poet and dramatist Laurence Binyon (1869-1943) is best known today for war poetry about World Wars I and II, but his early interest in the Trojan War and knowledge of the Quintan Posthomerica are evident from his 1905 poem, "Penthesilea," and 1906 stage play, "Paris and Oenone."
These works presented readers with ancient stories that were new to them, and unavailable at the time from any other source in English. Binyon's character studies of Achilles, Priam, Andromache, and Paris paved the way for Arthur S. Way's 1913 English translation of the Quintan Posthomerica, although these stories would remain less well known than the Iliad and Odyssey of Homer.
Arthur S. Way's 1913 English translation of Quintus appears in Appendix B.
Laurence Binyon's 1905 poem, "Penthesilea," appears in Appendix C.

In 1995, when Jeff Bezos founded an internet company that was to become the world's largest bookstore, he chose the name "Amazon" to represent the entirety of human literary tradition.
Bezos's biographer concludes that the businessman was thinking of the South American river and its prominence before Apple in any alphabetized listing of companies. But possibly, in the back of his mind, Bezos was also honoring Penthesileia and the Amazon story that's been lost and found, told and retold, for thousands of years.