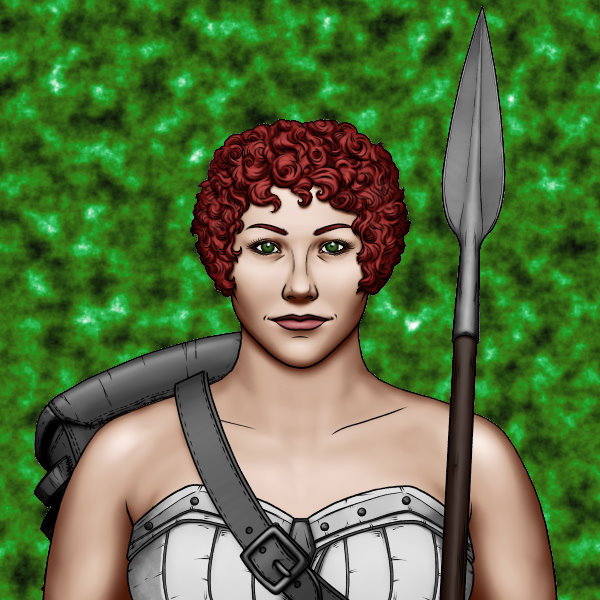 Derimacheia is slightly shorter than average for an Amazon and a bit on the stocky side. Her rust-red hair is beset with curls. Her green eyes are warm, inviting, and friendly, though she is prone to outbursts of rage.   Her tribal tattoo is a five-petalled flower on the left shoulder.

Derimacheia is detail-oriented and is usually the one member in the group who has both foreseen an unexpected event and prepared for it. Her zest for life is contagious but she is also prone to bouts of melancholia, and will disappear for days at a time by herself on hunting and provisioning trips. At other times her sister, Alcibie, is the only one who can break her out of a funk and make her smile again.   Derimacheia is an exceptional hunter and tracker who enjoys putting meat in the pot, and a culinary genius who can turn meager pickings into a feast. She is a collector of many small, seemingly useless items that prove necessary with surprising regularity.

Derimacheia is deadly at great distance with bow and javelin. She tries to avoid close combat but will bash heads with an axe or club if cornered. She believes that knives are for cutting meat, not men, and will avoid tarnishing her blades with human blood unless absolutely necessary.   Note: Proficiency at horseback riding makes each mounted Amazon a match for a two-man chariot, and provides a height and speed advantage over infantry units.

Derimacheia is a daughter of Hippothoe and sister to Alcibie. She has no knowledge of or ties to her biological father, but claims Hestia as her patron deity. In Amazon culture, it would be customary to call her a daughter of Hestia.

Derimacheia is introduced along with Penthesileia's other Amazon companions in "Ride, Amazons, Ride!" in Amazons! .   At King Priam's welcoming feast, she is seen in "A Table of Allies" in Amazons! , telling the story of how she slew the Bactrian Stag, which then devolves into a series of cooking tips for venison.

Derimacheia appears in Book I of the Posthomerica of Quintus of Smyrna, a 4th-ish Century retelling of a story from the long-lost 8th Century BCE Aethiopis of Arctinus Milesius.
Show spoiler
She has no speaking lines, is credited with no kills, and is decapitated by the sword of Diomedes, along with Alcibie.

Fleshing out Penthesileia's Amazon companions was a challenge. The family relationship with Alcibie and Hippothoe was necessary to increase the drama in the battle. Making one of the company a provisioner and chef fills an important role in the group and serves as a nod to the Hobbits in Lord of the Rings.   Now I challenge you not to picture her as an Amazon Hobbit.
Please Login in order to comment!
Powered by World Anvil