Bard of the Amazons

Alcibie is one of twelve Amazon warriors who attend Queen Penthesileia during her journey to King Priam's Troy. She tries her best to lighten the mood of her companions with singing, tales, and practical jokes. 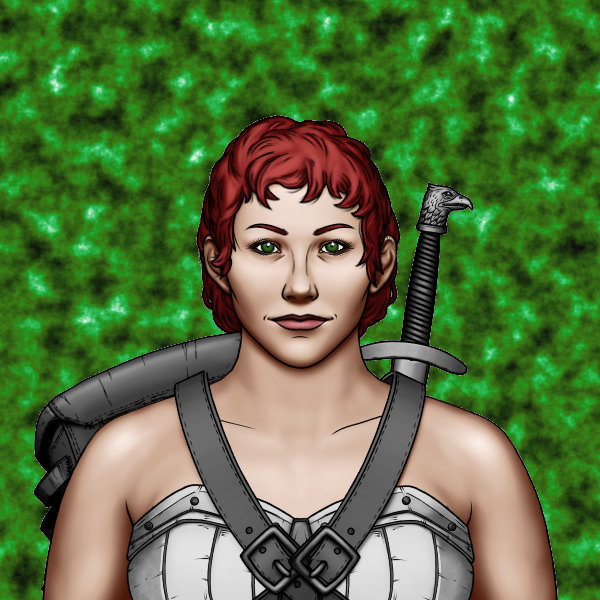 Alcibie is slightly shorter than average for an Amazon. Her rust-red hair is trimmed short in a style that adds a pixyish air to an otherwise solid appearance. Her green eyes have gold flecks and expressive brows that she uses to dramatic effect.   Her tribal tattoo is a five-petalled flower on the left shoulder.

As a practical joker, Alcibie always keeps her companions on their toes, lightening moods and seeming to intuit just the right times when one of her friends needs cheering up. She also loves collecting stories in her travels, and retelling them to the endless fascination of her audiences.   She has named herself the official chronicler of the lives and adventures of all her companions, including Penthesileia.

A capable warrior known for speed and precision, Alcibie specializes in the dagger when in close combat, prefers the bow from horseback, and is quite handy with a sword. Alcibie carries three daggers, balanced for throwing (and also for juggling).   Note: Proficiency at horseback riding makes each mounted Amazon a match for a two-man chariot, and provides a height and speed advantage over infantry units.

Alcibie is a daughter of Hippothoe and sister to Derimacheia. She has no knowledge of or ties to her biological father, but claims Hermes as her patron deity. In Amazon culture, it would be customary to call her a daughter of Hermes.

Alcibie is introduced along with Penthesileia's other Amazon companions in "Ride, Amazons, Ride!" in Amazons! .   Her antics at King Priam's welcoming feast are highlighted in "A Table of Allies" in Amazons! , where she is seen dancing on tables and juggling daggers.

Alcibie appears in Book I of the Posthomerica of Quintus of Smyrna, a 4th-ish Century retelling of a story from the long-lost 8th Century BCE Aethiopis of Arctinus Milesius.
Show spoiler
She has no speaking lines, is credited with no kills, and is decapitated by the sword of Diomedes, along with Derimacheia.

Fleshing out Penthesileia's Amazon companions was a challenge. The family relationship with Alcibie and Hippothoe was necessary to increase the drama in the battle. It also means I can cut and paste a little between these entries.   Having one of the company as a bard is a bit of a nod to pixie-like portrayal of Gabrielle in Xena: Warrior Princess, a myth-based TV series from the 1990s. I only remember that show in a haze that's probably nothing like it actually was, but the Internet does confirm that it actually existed. Have you seen that show? What do you think of it? Let me know in the comments!
Please Login in order to comment!
Powered by World Anvil